The Market Frenzy Continues. For Now.

The effect the pandemic has had on the real estate market has been surprising to say the least.  Most homeowners are quite shocked when we inform them that the current market is the strongest seller market we’ve seen since 2006.  We certainly expected 2020 to be a sellers’ market, given that 2019 so strongly favored sellers thanks to a low supply of homes combined with strong demand.  But we have to confess that we didn’t imagine a pandemic would further strengthen that.  But, as counterintuitive as it sounds, it has fostered a frenzied real estate marketplace. 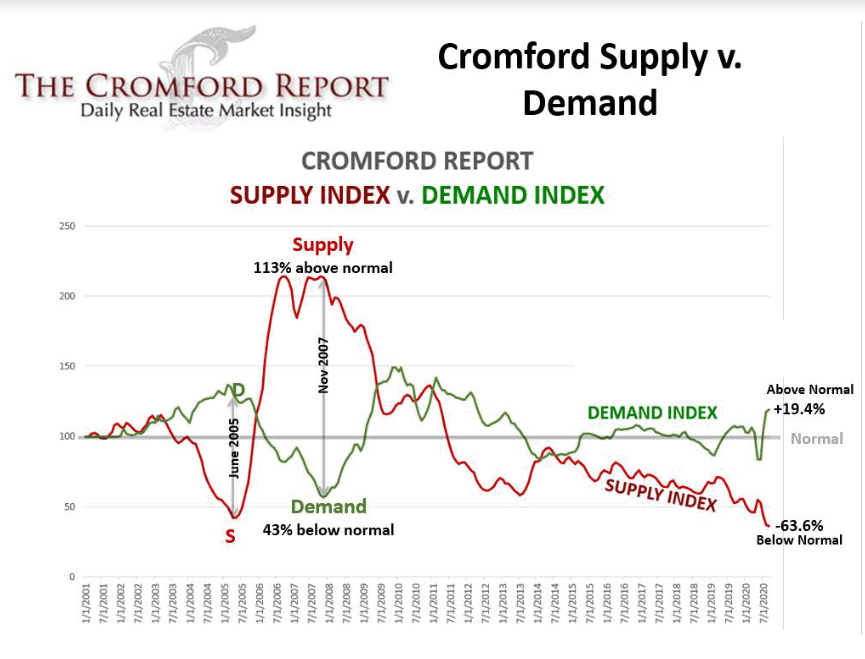 Supply (homes for sale) began to dwindle once the local government ordered shutdowns.  Fears over contagion of the virus, homes suddenly converting to makeshift workplaces, job losses & furloughs, all combining with “sheltering in place” caused sellers to delay home selling.  The already low inventory that began the year winnowed to ridiculously low levels as homes under contract were not replaced by other sellers coming to market.  A balanced market is approximately 30,000 properties for sale – as of the date of writing we are at only 8500 properties!

On the demand side, the initial drop in demand that occurred in March and April strongly reversed course in mid-May.  This occurred primarily for two reasons.  First, demand was unseasonably suppressed in March – typically one of the highest months for demand yearly.  But the demand was just temporarily suppressed and returned with vengeance (the coiled spring theory – the longer something is suppressed the higher the bounce when freed). Second, demand was strongly spurred on by historically low interest rates.

When low supply meets high demand, multiple offers collect on homes and results in upward pressure on pricing.  That is exactly what has happened to our market. Tina Tamboer of the Cromford Report comments:

So if prices are moving upwards, shouldn’t that dampen demand?  Yes, that is the theory of supply and demand being a scale that constantly rebalances.  But interest rates have a strong impact on affordability – even more than a moderate rise in pricing.  Which is exactly why demand still remains strong – these historically low rates have improved affordability despite the rising prices in the valley.  In fact here are some interesting numbers from Tina Tamboer regarding the “Home Opportunity Index” (HOI) which is calculated on a combination of pricing, lending guidelines, interest rates, and medium pricing in an area.

“It’s a jungle out there for buyers, but despite recent appreciation rates the HOI measure for Greater Phoenix increased to 64.8 for the 2nd Quarter 2020; the previous measure was 63.0. This means that a household making the current median family income of $72,300 per year could afford 64.8% of what sold in the 2nd Quarter of 2020.  By comparison, the HOI measure for the United States was 59.6. Historically, a normal range for this measure is between 60-75. During the “bubble” years of excessive appreciation between 2005-2006, the HOI plummeted from 60.1 to 26.6. Typically if it falls below 60, the market should start to see a drop in demand.  With the most recent increase however, Greater Phoenix is still within normal range and experiencing demand 20% above normal for this time of year.”

Despite the HOI for Phoenix remaining in a viable range, there are many who fear that 2020 has all the makings to repeat the notorious rise of 2006 followed by the infamous implosion in late 2007.  Despite such fears, this market is very different from the 2006 market.  At that time we had a glut of supply (i.e. housing was built faster than the population growth supported). Today there is no such glut. In fact we have the opposite issue – the population growing faster than housing.  Too many buyers, not enough housing is a key reason we currently have the hottest market for sellers since 2006.

But if history is a teacher, we have learned that markets like this don’t last forever.  To that point Tina Tamboer further comments:

“…This type of market and appreciation is not sustainable over time; however it’s here now and properties purchased today are expected to continue appreciating over the next 6-12 months.”

If we don’t expect a repeat of the market crash of late 2007, what do we expect to happen down the road?  Our personal guess (and this is admittedly a guess) is for supply to remain artificially low the rest of this year.  However we do expect to see a strong increase of sellers coming to market in 2021.  Why?  As government programs lapse (i.e. unemployment rates reverting to former payment levels, forbearance for mortgagees, landlord/tenant relief ,etc.) some homeowners will likely need to sell in order to relocate for employment, change to housing that better suits their economic situation, or move for altered needs (homes with more workspace or to more rural settings).  Additionally, just like demand, the coiled spring theory applies to supply. Sellers who postponed selling due to the pandemic cannot postpone forever.  We expect that to show up in 2021.  Does that mean we see a rash of foreclosures?  Absolutely not.  There is simply too much equity in homes (unlike 2007) for sellers to need to do that.  Sometimes history does not repeat itself.  Whatever the future brings, we are here to answer your questions and concerns.  Thinking of selling?  We are always delighted to examine the numbers in your particular neighborhood!